I intend to make this toy out of plywood and wooden dowel pins. A combination of the Makerworkshop being closed for the week and the desire to get some peer review feedback before building the final version led me to fabricate a works-like prototype from cardboard.

One potential issue that this mock-up highlighted to me was the undesirable out-of-plane tipping caused by the additional weight of the fixtured object moving the system’s center of mass forward. In this configuration, the object is essentially held on by friction against the pins, which is non-ideal. The magnitude of this effect will be smaller in the final version since the fixtured object will have a much smaller mass relative to the plywood board. I think I will be able to correct this tipping in the final version by calculating the moment contributions of the board and the fixtured object, and offsetting the screw eye attachment point backwards.

The idea behind exact constraint design is to build things that are simple to analyze. When an object is constrained by exactly the same number of elements as there are degrees of freedom, it occupies a tranquil middle ground between the complexities of motion and elasticity. This obviously makes the design engineer’s life easier, and hopefully encourages more analysis and less “let’s just build it and see how it turns out”. 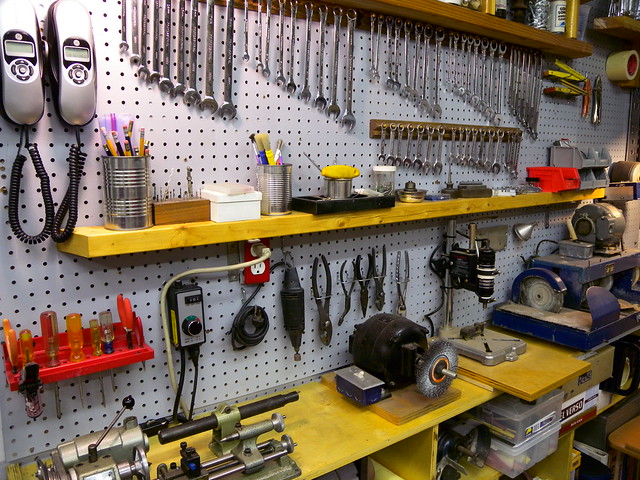 The design of this planar exact constraint toy is inspired by the pegboards used to organize tools. Most pegboards are mounted securely in workshops and hipster lairs, where the walls don’t move appreciably. But what if you wanted to design a pegboard for use on a boat? or just someplace prone to earthquakes? This toy allows you to explore how far a particular peg configuration would allow you to tip the board before your object falls off.

I plan to make my toy from a small sheet of plywood in which I will drill a 1″-pitch grid of 3/8″ holes. The user tests out different support configurations by inserting supplied dowel pins into these holes. A square block of wood will serve as the planar object to be fixtured. The board can be suspended by the attached screw eye and rotated about the pivot point to vary the direction of the gravitational force.

I wrote a simple MATLAB script to model the stability of a planar object supported by three pins. The script takes the coordinates of the pin contact points as well as the orientation of the weight vector (theta) as inputs and returns the reaction force developed at each contact point. The values of theta that correspond to sign changes in the pin reaction forces should be interpreted as the limits of stability for the support configuration. My MATLAB model neglects friction, both between the object and support pins, as well as between the object and the underlying board surface, so one can expect the analysis results to vary slightly from actual system behavior.

Unless otherwise stated, all work on this site is licensed under a Creative Commons Attribution-ShareAlike 4.0 International License.